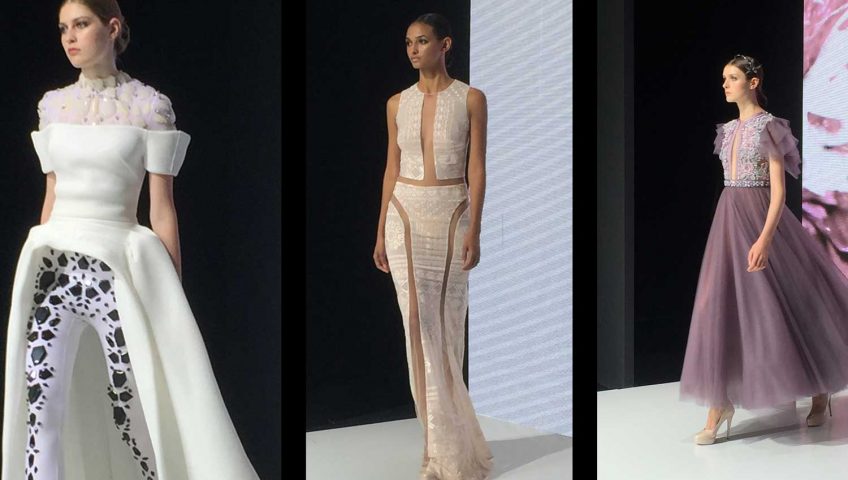 I don’t have any idea that Michael Cinco, a friend base in Dubai will give a show in Paris until I‘ve learned from Albert Andrada, a long time friend of mine that he is going to Paris. I thought all the while that he will just visit and I said that if we can meet. Without seconds he said yes and the excitement begins. He said he will go to Paris for Michael Cinco’s Haute Couture Show. His show will be in the opening of the Paris Couture Week. It is by invitation only and Albert said that he will secure one for me. The original plan is that my partner Ronald will go with me  but he has changed schedules so it will only be me. I got more excited hearing about the show but that is only an extra for me since I really want to see Albert again after those long years. I knew that Michael has already made a name for himself but our chance to meet seems to be very slim when he visits Amsterdam and me in Dubai.

Friendship is What Binds Us 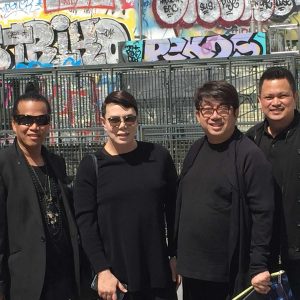 Although Albert and I haven’t seen each other for about 40 years since I went to Amsterdam and he worked in Dubai. We have contact once in  awhile through Facebook. I remember that  he called me up about the time when I was using FB for the past days. He seems to find me through a common friend Jimi working also in one of Dubai’s Royal Families. We have a lot of common friends who are also doing very well in Dubai. I am just so ecstatic with our conversation and talked over people we know and promise to see each other one day. He is still in Dubai working as the head designer from the other Royal Family. Jokingly, he said that I should go there and we will dressed up together with Jimi and I will do their make-ups.

I am some few years older than Albert. I was already in college while he was in still in highschool. I am from a different university so as he but we used to go to the same campus where most of our common friends visits. There, we have our camaraderie and we talked about fashion, beauty contests and men.The most familiar topic from everybody who has been new and just entering the gay world.That time, we have no idea that we will someday land on the beauty and styling industry in the future. That time,we just like to have fun! We also joined beauty contest as well doing some impersonations on our free time. For me,that is one of the happiest part of our growing up. To be ourselves, and to be with  people we liked. Being with our gay family. 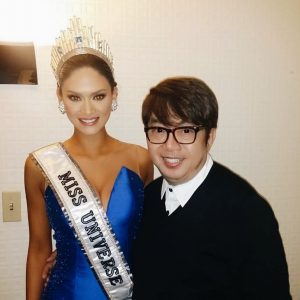 I learned years ago that he and his partner Rene have decided to go back to Manila to start their own atelier there. I have been hearing news about his successes in Manila  and the fashion shows he gave for the elite group. I am just so happy to know about his accomplishments through his postings and news from friends. Being only connected in FB, and his occasional postings of bible verses, it gives me the thought that he is still grounded in spite of his successes . Then came the Miss Universe news! I knew he is dressing up beauty queens and celebrities in Manila and it is not a surprise at all that he will one day dress up the Miss Philippines for the Miss Universe contest. Last year was still  a trying moment for a Filipino designer to dress up representatives to international beauty competitions. The local franchise holder is a former beauty queen from Colombia married to an opulent Filipino businessman. Ironically, gowns of Filipina beauty queens for international competitions and even their national costumes are made by a certain Colombian designer. There are years of protest that a Filipino designer should dress up the Miss Philippines representative but to no avail. Because of strong media calls and the ridiculous national costume and gown by the last representative, the local franchise holder  gave up and allow  Filipino designers dress their queens. Albert was chosen to dress up Pia Alonso Wurtzbach for the Miss Universe Competition. He made a beautiful Terno, one of the Philippines national costumes. It was made in shells and beautiful embroideries. For the evening gown competition, he made a beautiful royal blue gown whose accent is at the back embedded with swarovski crystals. And she won! The third Filipina to win the Miss Universe crown. Who would imagine that Albert would be an instrument to quench the thirst of the Filipinos for the Miss Universe crown in 42 years? My close friend has indeed come a long way, what a success story indeed!

Dubai based Michael Cinco, a member of the Asian Couture Federation was the first Filipino designer to give show in Paris Haute Couture Week. Established names in haute couture fashion are the only ones given a chance to showcase their collections. It was an invitation only event for those whose who in fashion. Michael showcased his 30 pieces collection of hand embroided gowns, laser- cut organza flowers and swarovski encrusted gowns. His collection has an acknowledgement to his Filipino roots. From the mat weavings, the mantillas, terno and barong inspirations, the  couture creations are all hand made and some are embellished with micro beads. A moving art form as his model glide on the runway. A poetry in motion! I have never been so proud that a Filipino will showcase something like that in a city where high fashion is in it’s highest form. I am gratefull to have witnessed this event and be part of this Philippine fashion history.

Melting Down of Creativity 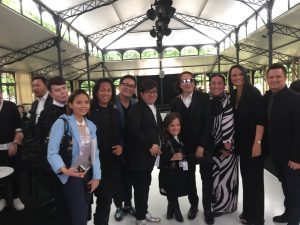 All friends from all over the world who came to support Michael gathered all together after the show for celebration and some bites. With us is Jonas Antonio Gaffud, a well known Filipino  catwalk trainer for beauty candidates both local and international. Most of his last candidates for the Binibining Pilipinas,  dominates the winning girls for the titles at stake. One Filipina winner who will represent for the Miss International crown who is also visiting Paris drop by with her French model boyfriend. Jonas is now busy organizing the next Miss Universe to held in Manila. Albert, Jonas and I stay in the same hotel and they are discussing plans over it’s staging in Manila next year.. It was  fruitful meeting of minds and exchanges of creativities and I am sometimes I am amazed about how big their plans are. But I am surely confident that with this kind of people and with the same level of thinking, all is possible!

Going back alone in Amsterdam, I felt so big in my heart. A certain fulfillment that I have seen a long lost friend Albert Andrada, and be a witness to a history in Philippine fashion, seeing the Michael Cinco’s Haute Couture Collection in Paris. I am so inspired by how these two creative minds have done things following their dreams. (As I have also done reaching mine establishing my salon in Amsterdam) Fifteen years back in Paris, Michael was on a bench at Jardin de Tuileries dreaming to be one day giving there his show. And it happen. Ahh, yes follow your dreams. Just follow it!