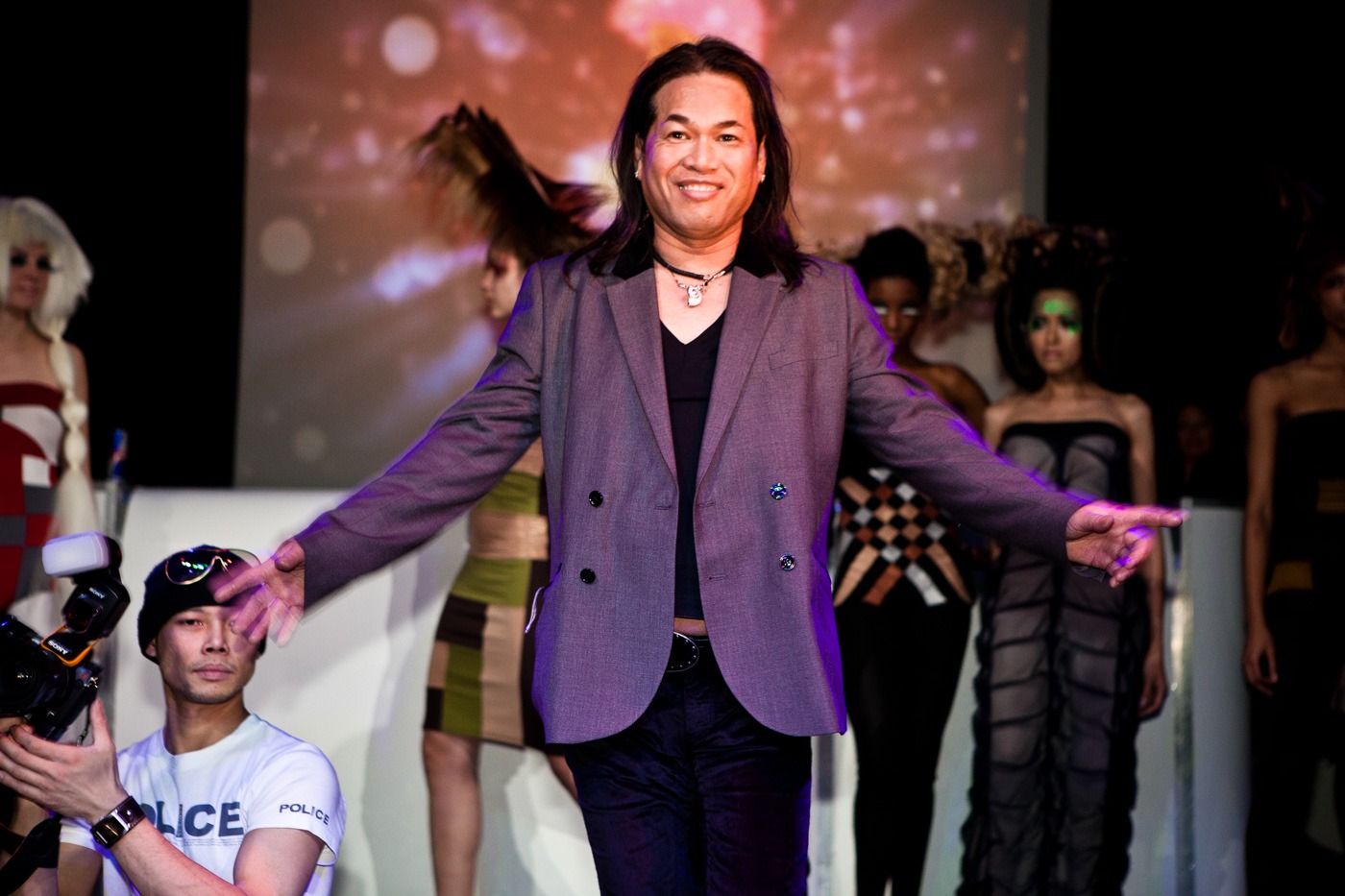 …FROM CUTTING THE HAIR OF CHILDREN ON THE STREET IN THE PHILIPPINES TO PRESIDENT OF THE INTERNATIONAL HAIRDRESSERS ASSOCIATION, AND, NOW, OWNER OF THE SUCCESSFUL AMSTERDAM JITTY’S HAIR AND MAKE-UP SALON IN AMSTERDAM …

Jitty’s story and his vision on hairdressing.

Jitty was born 54 years ago as the youngest of 8 children in Manila.  The family was poor but committed to the wellbeing of their children.  The reality was that even very young children had to work to help the family income so Jitty sold fruit and nuts on the street.  Despite this, there was also some time for play.  It was in playing that, by the time he was seven, Jitty found his vocation: hairdressing.

“I rolled and plated the hair of my female playmates using twigs with the leaves stripped away. These were my earliest tools.”  Says Jitty, with a smile.  “My parents hoped that I would study medicine instead.”

Jitty is artistic and it is with hair that he finds a natural material for his creations.  The dream of working as a hairdresser was planted in these early experiments and finally, aged 20, he had the chance.  His first experience of a salon felt like he had found his natural home.

“This was like heaven for me, it was magic:  Here was a place where people could be transformed.”

The salon where he started his formal study was run by Jun Encarnacion, one of the most famous hairdressers in the Philippines.  By the late seventies, Jitty could start to realise his lifelong dreams:

“All I need to see is my client leaving with a smile on their face. That alone makes me so happy.”

Even within heaven, someone must do the menial work, so Jitty starting sweeping the hair from the floor of the salon.  Within a week, however, Jitty was learning his trade, being taught to cut by Jun. This is what he had always wanted to do. Finally he had the chance to dedicate his life to his passion: hairdressing.

“That was a really intensive and beautiful time. I was so eager to learn and in no time I was cutting children’s hair in the salon.”

Jitty was in his element, his daily work was also his basic desire: the chance to make people beautiful.  He was quickly seen by the salon as young and gifted and, in no time, he was promoted from junior to senior stylist.  However, his motivation remained the same:

“When I am cutting I totally focus on that person and their hair.  If they then leave with a big smile, that, for me, is true satisfaction.”

Success built on success.  The phones were ringing and celebrities queued for the chance to have their hair cut by Jitty. 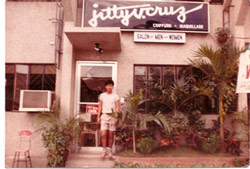 picture: Jitty in front of his own shop in Makati, Manila

Even though now successful, Jitty maintained his indefatigable commitment when it comes to his clients’ hair and the urge for total perfection during his cut and colour sessions.  This led to him doing television programs as well as work in the salon.

“Those were wonderful times. I learned from Jun that it is very important to pay attention and listen to the needs of the clients.  I established close relationships with them.  My success came from my own efforts and from much hard work by Jun for which I will always be grateful.  I became more and more ambitious, confident and committed to this profession … as long as I am breathing I will do this work!”

In a relatively short time Jitty, because of his perseverance and talent, became well known.  In 1980 he started his own salon. The Civic Award, for good entrepreneurship, and the Hairdresser of the Year Award, in 1983 and 1984 respectively, reflect his hard work and dedication to his profession and are evidence of the esteem he was held in by his colleagues.

Jitty reflects on that period:

“Yes, the sky was the limit. I got crazy assignments and did a lot for television and leading magazines including the weekly cover of Woman’s Home Companion, an authority in the field of fashion”.

To his close associates, it seemed that Jitty had reached the limits of the hairdressing field. Jitty saw it differently. He was still seeking new challenges so that he could continue to develop.  So he took the chance to study in Europe.

“During those years I wanted to develop as a hairdresser. I was aware that the techniques and the whole artistic phenomenon of the hairdressing world is always developing. This is one of the things I like.  So, in the eighties, I dreamt of going to Europe to be at the cutting edge of hairdressing’” 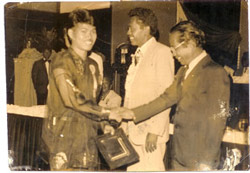 In pursuit of this goal, Jitty attended the best hairdressing schools in London – the Allan International, Jingles and Complexion International (for make-up). The latter was the start of a new direction and Jitty began to develop his natural talents as a make-up artist.

After London, he continued his professional studies.  The next year he went to Paris for a Masters Course at Institute National Coiffure de la Beaute.  This was the ‘icing on the cake’, the capstone of his new knowledge and the benefits were quickly felt by his clients in his own salon. His expertise was again recognised by his peers who elected him as President of Hairdressers Association for International Relations.

However, not everything was going well and he had a feeling:

“Something in me says that I should go to the Netherlands.”

The Marcos dictatorship was now in power in Philippines leading to economic and social problems.  The tanks, such a symbol of that government, were often placed directly outside Jitty’s salon.  Nor was the bad news all from the wider world.  In this period, Jitty’s Dutch partner became sick with cancer and had to leave the Philippines to be treated in the Netherlands.

To Jitty it was clear: he had to be with him even if this meant leaving everything behind.  For such a major change in his life, Jitty’s explanation is simple:

However, the bad luck continued.  His friend was having intensive treatment in hospital even as they were trying to establish themselves in the Netherlands.  Jitty had little time to devote to his new country and shortly after their arrival his friend died of the cancer.

“It was like being in hell and, for once, I could not find solace from my natural vocation as a hairdresser.”

Jitty’s period of mourning was profound. In part, memories of his friend were like a knife cutting into his body. However, he was also a stranger from the Philippines now living alone in Amsterdam. His only assets were a roof over his head and his inexhaustible will power.

Despite these inauspicious beginnings he was determined to make a success of his new life in Amsterdam.  Jitty, such a respected hairdresser in the Philippines, had to start again from scratch.  He drew on his memories of the hardships and struggles of his childhood and realised he now needed to act like that again.  Hard work and sheer dedication were all he could offer.

Only this time there is a substantial difference: he is trying to live in a rich European country with almost no resources.  This new phase of his life was a challenge, always testing and trying him.

“Those were really difficult times, but I was sure I should stay in the Netherlands.”

Jitty believed that his hairdressing diplomas were worthless in the Netherlands and working in a Dutch hair salon felt like an impossible dream. Equally there was, like the sword of Damocles over his head, the threat of deportation.  Jitty did not have the necessary residence and work permits and feared being deported. A public job such as hairdressing seemed impossible in the circumstances.

Denied the chance to practice his vocation, he had to take any work he can.  This included cleaning hotel rooms at Schipol as well as working as a cook. A respected hairdresser, who had been so well known in the Philippines, was now cleaning hotel rooms. 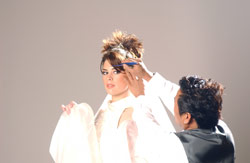 picture: Jitty is giving a final touch on one of his creations at the Hilton fashion show in 2003

THE MASTER OF HAIRDRESSING, JITTY V. CRUZ HIMSELF, HAS SETTLED IN THE NETHERLANDS.

However, luck and hard work turned things in Jitty’s favour in both his personal and professional life.  First, he met a person who was to be his lifelong partner, Ronald Pronk.  Second, Ronald stimulated him to return to his vocation – hairdressing.  By the late 1990s he began to work again at different salons in Amsterdam.

News spread like wildfire in the Filipino community that the master of hairdressing, Jitty V. Cruz himself, was settled in the Netherlands. Jitty was busy again at the vocation he loved, and, in 2002, Ronald and Jitty decided to expand. Their love for each other became a business partnership too and they opened a salon named Jitty’s Hair and Make-up at Bilderdijkstraat 156. 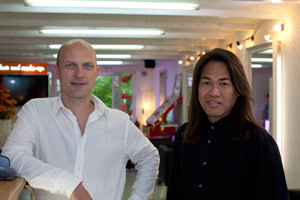 To be an accessible quality hairdresser

Within the crowded hairdressing market, Jitty and Ronald decided the way to stand out was to run an accessible, quality, hairdressing salon.  This sounds simple, but like many such ideas it takes real dedication to first identify what this means and then put it into practice.  At its heart, to them, is a conversation with the client.  If they can understand what the client wants, then the haircut is so much more than something done by the hairdresser.

Ronald and Jitty have found that:

At Jitty’s they are fully aware that hair is an extension of someone’s personality and an indicator of their wellbeing.  Equally this part of the human body is always on display so a haircut is an important part of self-image and personality.

The people who work at Jitty’s are skilled people.

The hairdressers who work with the two guys are highly skilled. However, this is more than just a reflection of technical ability, the staff need to be emotionally intelligent as well.  Anyone who works at Jitty’s must be sincere and authentic; without these qualities, then there is no way for someone to work in this salon. It is not place for self centeredness or just ego tripping. Jitty’s approach is to constantly listen to what the clients say:v

“Every time a client says that they liked the cut or colour that is good but if they say we have listened to what they wanted then that is even better. That is our constant goal: people who are happy with their hair.”

The style of the haircuts and hair colours is constantly changed to reflect the latest trends inside the fashion and hairdressing world. Jitty achieves this both by observing street fashions and from first hand information about international innovations. With his worldwide networks in the hairdressing field and by following developments in other leading countries like England, France and Italy, Jitty ensures his team are up to date with the most recent developments and techniques in hairdressing.

For thirty years, Jitty has developed his passion for hairdressing.  He has never assumed there is nothing new to learn and constantly looks for new developments and innovations. He, and his staff, can handle European, Black and Asian hair styles. Hairdressing has always meant a lot to him – he even dreams about it!  To Jitty, the Netherlands is a place where he now feels at home as a person, as an entrepreneur and, above all, as a hairdresser.

HE CAME, HE SAW AND HE HAS CONQUERED. 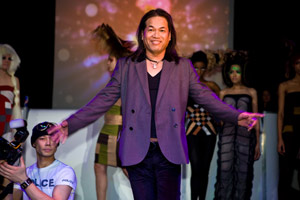 30 YEARS AGO, JITTY WAS A TOP HAIRDRESSER. HE STILL IS!