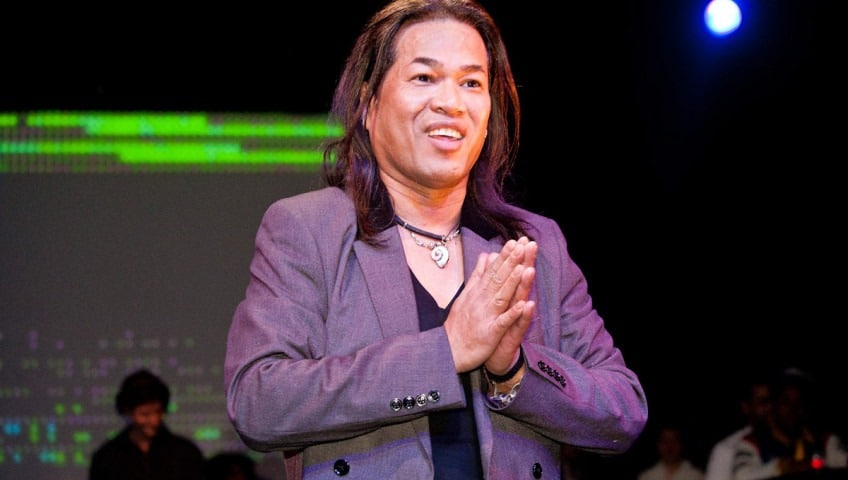 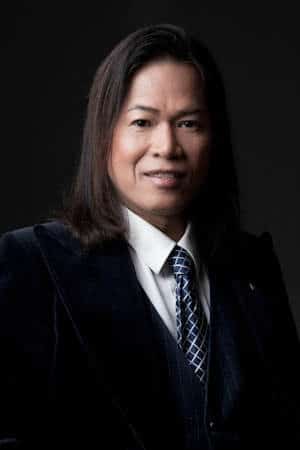 With more than 30 years in hairdressing business and beingsuccessful in two continents plus winning the L’Oreal Color Trophy Competition and this years 10th anniversary of our salon in Amsterdam, that’s a lot of reason to celebrate. It has been a long journey indeed and I am so proud that my heart is fi lled with joy concerning my career that I am happy to share with you.

My passion for hairdressing and make-up begins at a very young age. I was 10 years old and found
myself att racted to my sister and aunts beauty rituals. My playmates were young girls and I used to curl their hair with twigs from leaves, polished nails with powdered clays and used red crepe papers as lipsticks while mimicking dance steps on a popular television program. I was born from a poor family of six children in suburban Manila. My parents, though under educated themselves, pushed us to study and believe in ourselves. Some of us graduated because of scholarships and tokens from relatives and friends. With not much hope of fi nishing my college studies as a working student, my inclination to hairdressing sparked again when I became associated with gay friends during my blooming years. My “gay mother” brought me to Jun Encarnacion, a well-known hairdresser in Manila to learn the basic craft of hairdressing. Training 7 days a week, I was immediately promoted as a shampoo boy after 2 weeks and that began my interactions with clients and honing my social skills. 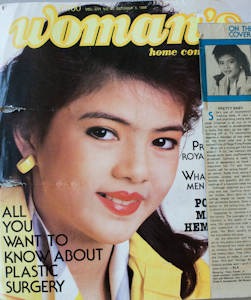 Hairdressing became my popular choice of career because of its creative style, interpersonal skills and possibilities for salon management and owning my own business. I became more determined in hairdressing and aimed to be on top of my career. I follow a path and focused myself to put work fi rstand prepared myself to be responsible for partaking and learning the trade by att ending sponsored seminars to further my passion for hair.
Then, one rich client off ered me a partnership to open a salon in Makati’s business district. Though it didn’t last long due to individual diff erences, it opened my mind that I can do it my on my own. I started my own salon in 1981 in a small garage in the nearby place. Using second hand materials, I fi xed the exterior to look like French windows. I become popular to some military wives and my connections branched out. I was commissioned to do the cover of Woman’s Home Companion, a popular weekly magazine circulated nationwide, doing shows and photoshoots here and there and was given the title `Hairdresser of the Year`. That increased my popularity and colleagues voted me as president of HAIR Philippines (Hairdressers Association for International Relations).

It was a very remarkable year in my public and private life. I met a Dutch businessman, we fell in love and lived together. He became responsible for supporting me on my trainings in London and Paris and occasional holidays in the Netherlands. Due to my growing clientele, which now included models, celebrities and movie stars, I decided to move to a 3 story building opposite the road. But life is not always a bed of roses. The assassination of Benigno Aquino Jr., a strong opponent to dictator Marcos sparks a Yellow Revolution bringing chaos to the country and more specifically to the business center. And then my Dutch lover became sick and his heart problems became worse. He needed better treatment in the Netherlands. I didn´t need to think twice, I really wanted to be with him in these trying times. I sold my good running salon and fl ew with him not worrying about the consequences. It was hard and diffi cult living with his wife and family with our secret relationship. Being illegal and not knowing the language has not only its fears but also other disadvantages. I couldn´t work in a salon and ended up cleaning hotel and offi ce rooms.
My lover did not survive the last heart att ack. That felt like a fatal blow to me. I had nothing. No salon to go back to and nobody to lean on. I became, for a while, a wandering soul.

But then Ronald came into my life. I thought my heart won’t start beating again after those incidents but he just knew how to fi nd his way. Knowing how much I love my craft, he convinced me to pursue my hairdressing career. He salvaged me fro 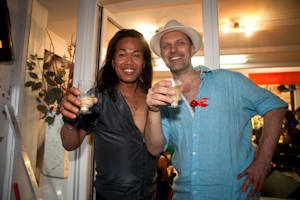 m distress. We started Jitt y’s Hair and Make-up 10 years ago with just a small capital but well full of enthusiasm. We started with a vision, To be an accessible quality hairdressing salon in Amsterdam. This idea, though simple as it might seem has turned out to be quite difficult to be put in reality. But nevertheless we never lost sight of our dreams and with a lot of fi ghting spirits work hard to achieve our goals.
I found the place, which was a former salon, while walking along Bilderdijkstraat during its annualstreet fair. I looked at the glass window and saw the potentials. However, the place was ugly then. The interior was covered by plastic walls, the ceiling low and there are partitions making it so crampy.Ronald began the renovations immediately with the help of some Filipino boys. His background in construction and as electrician saved us an enormous amount of money so we could buy second hand furnitures, salon products and equipments. And in a few weeks we were able to build a salon which would meet modern standards.

I begin to think with a purpose when we started Jitty’s Hair and Make-up in Amsterdam. I wanted to be recognized as the first successful Filipino hairdresser in Amsterdam whose love and passion for hairdressing is unsurpassable. I was a visionary. Building up my Filipino clients during my stay in Holland was a base that gives me enough encouragements to survive. I had aspirations but my enthusiasm was clouded by my naivete. Although I had had a successful salon in the Philippines, managing one in a foreign country is ten times as hard. Fortunately I had Ronald who decided to take on the management. Together we developed a thorough business plan on which we have built the salon as it is today. It is in this time that we decided to operate in the top of the hairdressing market here in Holland. The competition is tough, but we knew only that by setting ambitious goals we can be able to stand out and build a company that will survived.

Although knowing Ronald for 18 years and living and working together, disagreements and difficulties can crop up sometimes but they are solemnly solved and contribute to the deepening of our love for each other on the other hand. To be in this position, we worked hard. We took one step at a time and followed the right course and sail on to the right direction. It can be hard sometimes but we never quit, rather we change or adapt according to times.

Jitty’s is now developing as one of the most progressing salons in Amsterdam. Although our ambition is high, our initial goal to be an accessible quality hairdressing salon remains. In our vision, listening to what the client really wants is the key quality of a good hairdresser.

At Jitty’s we are fully aware that hair is an extension of someone’s personality and an indicator of their wellbeing. Equally, this part of the human body is always on display so a haircut is an important part of self-image and personality. If we are able to bring out the best of someones personality then they will shine, they will smile and a litt le happiness is brought into there lives. As a hairdresser you can touch your clients heart and sometimes even change their lives. Making our clients happy is our main goal and is surely my passion. My second passion is being on stage as a performing artist. My victory in the last year L’Oreal Color Trophy Competition Public Award gave me publicity not only on local media but international as well. New contacts appear and interesting assignments are off ered.

For the next ten years of Jitt y’s Hair and Makeup there is much more to come. To be always on the move, Ronald and I are considering to start a Hairdressing Academy. I would like to share myknowledge with upcoming hairdressers and the most important thing that I want to accomplish is to have a school for them.   Jitty’s Hair and Make-up is now a salon where there is an integration of races as you can see on our staff of diff erent nationalities. It has become a salon where you can, not only do your hair butshed your emotions as well. Clients become friends and are now growing as family. As happiness of our staff and clients is our most important goal we are hoping to touch many more lives and bring them a smile, the Jitt y’s smile.
Celebrating our 10th year anniversary, I think it is important to recognize our progress and take pride in our accomplishments. We would like to share our achievements with you and together celebrate the joys of today, the memories of yesterday and the hopes of tomorrow! 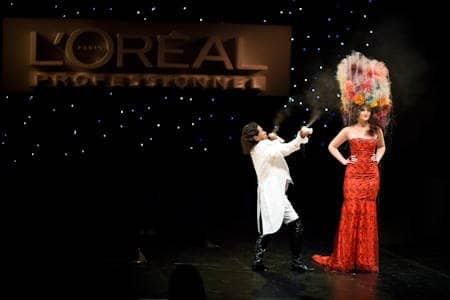